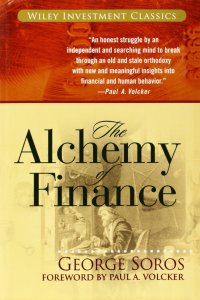 One of the most important steps to understanding reality is understanding the feedback loops that operate. These can be self-sustaining for some time and often lead to exponential change, but are ultimately, necessarily, self-defeating. A fission bomb is one example. A Uranium atom splits and releases two neutrons. Each of those can cause another atom to split. An enormous amount of energy is released, but quickly there will be no more Uranium left to split and the chain reaction will end.

The same mechanism underpins financial markets, leading to booms and busts. Considering the dynamic created by feedback loops is important when making almost any kind of decision, as is its implication: Complex systems (markets, diplomacy, reality) are historic processes which can be uniquely explained post facto but which have many possible outcomes ex ante.

Building on this, “reflexivity” is the term Soros uses to describe the feedback loop which runs between reality and the participants’ understanding of reality, and vice versa. Traditionally, we think only of the causal arrow from reality to our thinking. FooCorp has grown its market share by 25%, therefore we think it is better than its competitors. Reflexively, the arrow also runs the other way. For whatever reason, the bank thinkg FooCorp is better than its competitors so they loan them money. As a result, FooCorp becomes more competitive. Reflexivity occurs in economics, politics, dyadic interpersonal relationships and drives the Jobsian “reality dysfunction field”.

Economic supply and demand curves are an interesting example of reflexivity. Typically, they are independently given and assumed not to interact. Instead, their intersection should simply determine the price at which the market clears. However, trivial examples of reflexive interaction between the two abound. High supply versus demand in a commodity (and therefore low prices) stimulate new and innnovative uses for it, in turn creating new demand. Higher demand increases prices, which in turn increases supply. Prices do not stay at equilibrium but instead move dynamically, in a historic process.

Reflexivity also introduces unpredictability into the historic process that is reality. In part this is beacause participants are seeking to understand reality but also affect reality. These goals can conflict with each other. Additionally, what needs to be a fact to make prediction possible is itself contingent on participants’ view of the situation, an unknowable which changes if it is learned. Whether or not Bob Smith stands for leadership of the Bar Party depends on what he thinks everyone else thinks about his standing for leadership.

What does this mean for the existential goal that is predicting the future? On the one hand, acknowledging reflexivity and its implications forces us to acknowledge that perfect prediction is impossible. On the other hand, perfect prediction is not necessary and incorporating it in our analysis allows us to do better. Classically, participants’ opinions are not causally potent, first class citizens in any model. They are statements about the model, not facts in the model. By explicitly including them we gain greater predictive power. That is what we can do. How? That depends.

What do you think? Cancel reply